Add to Favourites
Incorporates two polarizing sheets mounted at right angles to each other allowing the London Dichroscope necessity to samples rays from two different areas of the same stone.

Examples are views of a Tourmaline/ruby gemstone with a London Dichroscope with a back light. With the same ray of light entering the gemstone both sides should be the same colour under the filter.

However, it will not separate natural gemstones from their synthetic counterparts (synthetic emeralds from natural emeralds or synthetic sapphire from natural sapphire).
It will enable you to easily separate single-refracting coloured gemstones from those that are double-refracting, and thus make many important distinctions among look-alike and imitations.
Another important benefit is that it can be used with gemstones that have not been cut or polished.
It is also very useful in cases where cut stones have such a low polish that other instruments (such as refractometers can not be used) or for jewellery pieces in which stones have been set in a way that prohibits the use of other instruments. 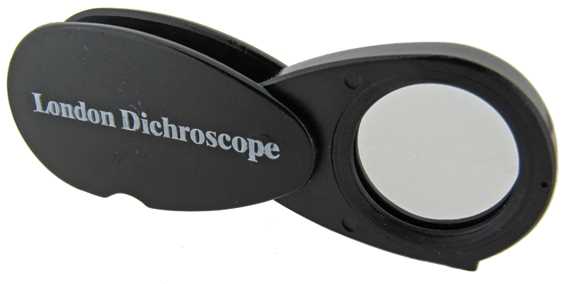