Combination bench stones have been proven effective for all sharpening requirements, established in 1823 and were Americas first and oldest sharpening stone manufacturer. Pre-oiled the surface using 3 in 1 Honing Oil (code 8690) for the best results.


Norton, a manufacturer's profile:
Sharpening stones for metal tools have been unearthed by Egyptian excavators dating back to 1450 BC. Our history is not so old, but when our pilgrim's forefathers landed in 1620 they soon discovered that they forgot to bring sharpening stones for their axes, knives and scythes. A crisis developed harvesting crops and wood for housing and heat became difficult, contributing to a very harsh first winter. It was a long wait for stones to be sent from Europe and search parties were sent to find suitable stone.

It was not until 1821, when Person Noyes, a New Hampshire pioneer stumbled along the finest deposit of mica schist in the world. Issac Pike soon followed and commercialized Person Noyes discovery in 1823 into what was to become the Pike Manufacturing Company. Worldwide distribution of Pike Sharpening Stones occurred as early as the mid 1800's.

In 1897 Norton Company and Pike Manufacturing Company joined forces satisfying the sharpening needs of the industrial revolution, the development of the safety razor, automation and every sharpening need known to man. Norton Pike has received citations from Admiral Bird upon return from his trip to the Antarctic and has received the Army-Navy production award for meeting production needs during World War II.

Since World War II, Norton Abrasives have established its brand in over sixty countries and also have found in India the same quality stones hence also known as the India Sharpening Stones, which to the present day Norton continue to mine and distribute sharpening stones for the demands of modern industry.

The technology that has evolved into the Combination Oil Stone is designed to satisfy the most exacting engraver, jeweller, watchmaker, clockmaker, model maker, toolmaker, mechanic, farmer, sportsman, wood worker, handyman and even kitchen chef, this product is highly effective for anyone's sharpening needs. 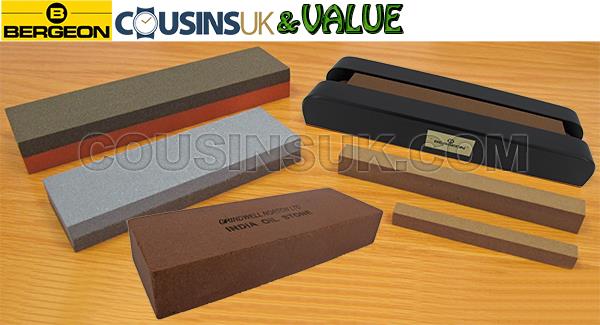