Documents
Add to Favourites
A piercing saw is a small tool in a fretsaw styled frame that has fine blades intended for cutting metal, traditionally used by jewellers, but has uses in model making and an array of metalworking fields that requires fine detail. Piercing saws are capable of cutting other materials including wax, wood and plastic, although principally they are mainly used on metal. The piercing saw gets its name from the process of making 'blind' cuts or 'piercings' whereby a small hole is first drilled through the work; one end of the saw blade is fitted into the saw frame and the other is threaded through the hole. The open end of the blade is then clamped into the remaining end of the saw frame. When sawing is completed, the saw blade is unclamped from one end of the frame and withdrawn form the work.

Piercing saws have a frame with pinch clamps that will grip the blades; handles are usually wooden like the examples from our range below.

Our ranges of saw frames are available in throat depths that vary from three to twelve inches.

The saws illustrated in our product range, have sliding adjustment to cope with differing blade lengths; this also enables the user to use the remainder of any broken blades. The sliding action of this feature is also used to tension the blade rather than the more normal method (described below) that is applied to fixed frames.

The saw blade is fitted into the thumbscrew clamps with the teeth facing towards the handle. The blades are fragile and are designed to cut on the pull down stroke so that the blade is held straight by the extra tension caused by the teeth’s resistance, guaranteeing no buckling of the blade.

The brown colourisation of the blade is due to its copper plate which inhibits rust and also acts as a minor lubricant when cutting hard steel.

However, the most optimum method of lubrication is to pull the blade from end to end across a block of beeswax, which lubricates the cutting and renders the cutting action quieter and 'sweeter to the feel’. 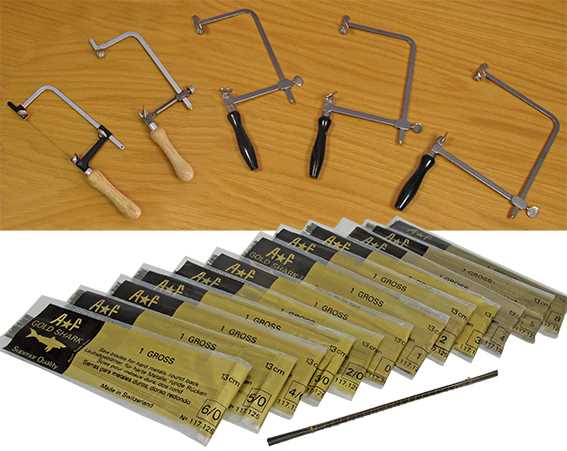 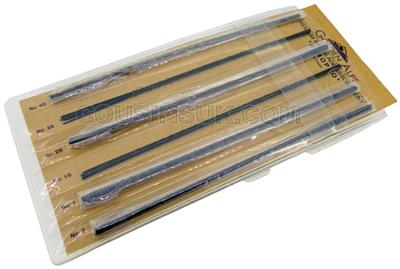